The recent reactivation of the Casco Drain Project has elicited concern and controversy for some. I have attached a detailed description of the project from the Drain Commissioner below but I thought it would be helpful, if I first provided some context for how we arrived at the current state as well as what I am looking to do to improve the process in the future.

The issue with water first came up for discussion over 15 years ago, as I began to receive calls from property owners east of the Blue Star about drainage problems they were experiencing in 2005. Property owners complained they were noticing more water in ditches and their property seemed to be wetter and wetter over time. We attempted to address the problem locally with development improvements west of the Blue Star and local property owners attempted to make improvements to their properties. Drains were cleaned in Miami Park but despite these efforts the flooding on 71st Street increased and the road had to be closed during the Spring and during periods of heavy rains. 107th Street west of the Township Hall flooded as well. We met with the Road Commission and they indicated without a more extensive system all they could do is move the problem to another property owner. 107th was paved and a new culvert was put under the road west of the Township Hall.

Despite local efforts to rectify the situation it seemed to get worse over time including cars being damaged driving on 71st Street. In 2012, The Township received a formal petition containing 40 signatures about the terrible shape of the road and requesting paving. The Township Board discussed the formal request for paving but knew we had to address the water situation to ensure the investment in paving was would provide value. The Road Commissioner indicated that a good drain with an eastward path to the river was needed or we would be transferring the issue to other property owners. The Road Commissioner indicated that the issue could not be fixed within the road right of way because the entire area needs improvement it may take a county drain. The Township Board discussed the problems and options including to petition the Drain Commissioner to research the larger area needing improvements and connectivity to solve the problem. The Township followed through with the petition but each step of the process moving forward from the 2015 Board of Determination Session seemed to be fraught with delays. Even after getting the engineering estimates in 2018 things have moved very slowly. I met with Drain Commissioner and the Engineer and expressed my dissatisfaction with length of time that this has taken and that plan communicated in the spring of 2018 created certain expectations that were not met. Since 2018, the Engineer gave us two timeframes for completion prior to 2020 (summer of 2019 and Memorial Day of 2020).  Waiting until now to construct this project in my mind widened the gap between what was estimated and the final construction bid as both material and labor costs have increased. Also, the paving on 71st Street that was contracted had to be delayed as the drain needed to be in place first. There should have been better communication regarding the delays and I have asked the Drain Commissioner to explain this in the attached letter.

Once we realized that we could not solve the water issues locally and appealed to the Drain Commissioner for assistance, at that point the problem came under the jurisdiction of the State Drain Code and was administered by the Allegan County Drain Commissioner. This includes all aspects, such as determining the need, design, defining the district including who would pay and how much each property owner would be assessed. I believe there are changes that could improve this process and I have requested meetings with our State Representative and Senator about our experiences. I have ideas for changes that could improve the process and improve participation for our property owners. 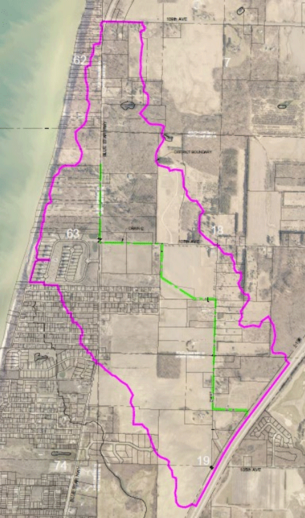